Elandra is the Queen Dragon. She has a special connection with Emily.

Elandra is mostly white with blue and gold detailing. Of the other full-grown dragons shown so far, she seems to surpass them in size. Presumably, she is the largest dragon of them all.

Elandra and Emily Jones have a special bond with each other similar to the rest of the elf/dragon bonds. She also is good friends with Azari Firedancer, Naida Riverheart, Farran Leafshade, Aira Windwhistler, Tidus Stormsurfer and Sira Copperbranch.

Elandra was once captured by Ragana, and now the two despise each other. It is unclear if she and Cronan Darkroot dislike each other, since they have never met after the elves knew he was evil, but in the end they appear to be friends. 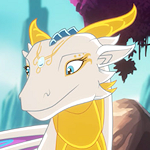