Emily's grandmother is one of the Five Sisters of Legend. She recently passed away, the duty of guarding the portal falling to her granddaughter Emily.

In the books, Emily's grandmother is also named "Emily." To avoid confusion, we still call her "Emily's Grandmother."

Emily's grandmother was one of the famed Five Sisters who devoted their lives to protecting all of Elvendale. One day, the time had come to open the portal from Elvendale to Earth. Emily's grandmother wished for humans and elves to coexist and help each other flourish, and volunteered to travel to Earth though it meant her losing her immortality. The other sisters agreed except for Quartzine, who desired power for herself.

After Emily's grandmother had moved to Earth, she met a man named Richard Jones and fell in love. She eventually had children, and then grandchildren. When she passed away, her magical pendant which allowed for travel between worlds was given to her eldest grandchild. In Elvendale, Skyra became enveloped in sorrow until the grandmother's granddaughter approached her, allowing her to properly mourn.

Emily's grandmother was caring, free-spirited, and pure of heart. She loved her grandchildren very much and often told them stories about Elvendale, though Mr. and Mrs. Jones dismissed these stories as "impossible." According to the book Quest for the Keys, she sometimes felt out of place in Elvendale since she was the only elf without magic. She sought to find others who were like her and developed a fascination for the Human World. Several of her hobbies are also mentioned in the book. Besides gardening, she enjoyed baking cookies, which taste just like the ones Johnny makes. Sharing her granddaughter's love for music, she never missed a single one of Emily's performances in the school choir, always clapping the loudest. Like a ray of sunshine, she has warmed the hearts of the people around her, and although she is gone, she will never be forgotten.

Emily's grandmother has dark brown hair which she wears in a high bun. She has bright green eyes and a fair complexion.

Her dress has three-quarter length sleeves and consists of three colours, white, yellow and blue. The sleeves are white and the bodice is yellow with blue trim. She also wears a blue cape.

In the novelization Quest for the Keys, Emily's grandmother is described by Skyra as "...not an elf, and she struggled to live in this magical world. She had those crazy round ears!". This means that at some point Emily's grandmother was meant to be human. This detail, however, seems to have been ret-conned in the webseries and the Netflix adaptation. In addition, a LEGO set sticker also depicts her as having pointy ears.

Richard was her husband.

She was likely the mother of Mr. Jones. We assume this because her husband, Richard, has the last name of "Jones" which Emily shares. There is a chance, however, that she may be the mother of Mrs. Jones instead.

Emily and Sophie were her grandchildren.

Skyra and Quartzine were her sisters. She also had two other sisters whose names are unknown.

Cronan was her nephew. 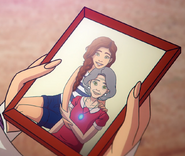 Emily's grandmother as an elderly woman with her granddaughter Emily.

Skyra's portrait of her and Emily's grandmother 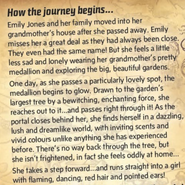